Mojang Name: 75rx
When you were banned (approximately): I think… on December 13
Why you were banned (if known): I already told a lot of times like why. Shortly: Death Threats
Why you should be pardoned: Before I can say why, I’d like to lose a couple of words:
Happy new year
I got a new PC so people wouldn’t ask me to update to linux cuz it doesnt lag and I usually get a average 270FPS

Now this is the reasons why I should be pardoned.

This wasn’t optional for anyway.

-Starting off when paralellipipedal told me to update to OBS as Bandicam has a link on top to their official site. I didn’t want to do that because my old laptop was laggy and same as OBS.

-Next, after a couple of saying, messloona started telling me to update to Linux as it uses lower resources. Nothing too special, but after a couple of sending requests from messloona to update to Linux and me replying lots of No, she became rude: saying a ton of words Dumbness idiot fucking noob, I could not patience that… so what I did is: /pt c:/msg messloona some rude words, not too rude
Then I clicked 25CPS using laptop + mouse, to send 25 messages per second. This is called chat flood as we all know. She didn’t like it so then he decided like oop time to report someone. Don (Don_Manuel_1229) started warning me about ban. When he joined, I thought he could see the message I sent: I better ignore messages from messloona (which I would) instead of getting banned. He didn’t read that, so I first lost control and cursor appeared, and after 3 seconds I got banned for sending messages that fast. Ban time was 2 weeks, or 14 days.

-After all of that, I finally got unbanned. I seriously didn’t like getting banned for 14 days due to one single player, that made me that mad so that I sent death threats. I already did show the message I sent in my previous topic, not sure to type it here, so that it equals like idk double ban: from 6 months to 1 year, so i guess I better not type that here. I were saying his instead of her. LordDecapo started telling me like you care or not. I were saying not because I thought he wants to say about saying his instead of her. To be honestly, I do really care about ban. When suddenly:

Failed to connect to the server.
You have been banned from this server!
Banned by LordDecapo

At least I am pretty sure this is enough. I accidently clicked post topic in the worst time, so that is the continuing on here.

some rude words, not too rude

I seriously didn’t like getting banned for 14 days due to one single player, that made me that mad so that I sent death threats.

Here, you are quite literally blaming your ban on someone else.

What is different about this appeal than the one you posted yesterday?

What here do you think would persuade staff to change their verdict?

I generally recommend people wait a few days, at least, before trying to appeal a ban again.

Just to be clear, this isn’t a verdict. I am just personally making some comments on the post.

We have decided not to change your current ban length.

I recommend you try to appeal again in a few months.

How many exactly time?
Also please tell me, did I get banned permanently or for 6 months?

It shows: unban time permanent, but reason is banned for 6mon death threats

That was before. I am a nice guy now. 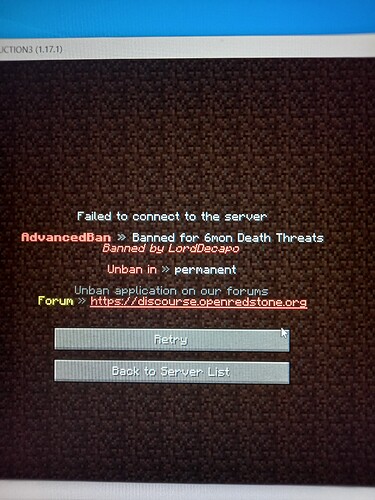 -Can agree. You made me notice that. But I am a nice guy, unlike before, believe me.

-There wasn’t any reason why I should be pardoned, except for asking

These are the questions that I asked so that you may ask.

-Just give me the last chance, please. You’ll see that I am actually a nice guy this time.

And that’s it. I will wait for to get replied yet I hope I would at least get my ban shortened. If I also made a mistake on this appeal, tell that. Yet I will not sleep a night trying to get a reply and see text “ban shortened” or “we have decided to SHORT your ban” or just “unbanned”. Just can’t wait to get unbanned.

Also please tell me, did I get banned permanently or for 6 months?

Just to be clear, the ban was for 6 months. We can fix it such that it doesn’t say permanent.

Yes. I meant the ban was since 43 days

Yes please. Is there any mistake I did in there, or did I get my ban shortened?

Oh, sorry!
But how many exactly time - no clue.

Why are you still going on about the details of Linux? That isn’t why you were banned. We don’t care.

This was why you were banned, but you decided to talk about your computer’s specifications and the details of Linux for much longer.

This is also not relevant to your ban.

This has been your third appeal in a matter of a few days. Do you think our verdict will change, yet again, after your appeal was already denied, twice?

I am now telling you not to appeal for at least two more months. That will be the 6th of March. At the moment, the Staff are still talking about what to… “do” with this appeal. Regardless, Staff do not appreciate your lack of focusing on the real reason why you were banned in all three of your appeals.

Okay, sorry. If I try the same answers in March 6th, would I at least get my ban shortened? That will be day 104/180 btw

We will cross that bridge when we come to it.