What do you like the most about redstone?:
Minecraft redstone is the most accessible 3D logic system that I have encountered, and it exists within a video game that is already fun on its own.

What’s a thing you have made which demonstrates redstone knowledge?:
16-bit CC ALU

What does the thing do?:
It does addition, subtraction, NOT, INC, DEC, and bitwise operations 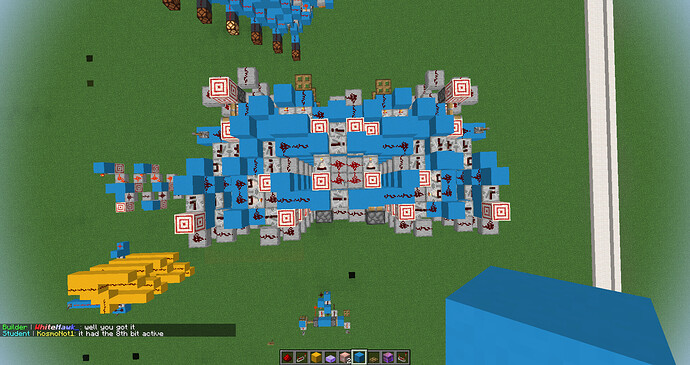 What do you plan on making for your build trial?:
I plan to make a smaller version of this ALU, perhaps only one hemisphere
Do you agree with the rules?:
Yes

I plan to make a smaller version of this ALU, perhaps only one hemisphere

What is a hemisphere in this context?

The ALU is partitioned into two roughly symmetrical hemispheres around the carry cancel portion, it allows 16 bits to be on one carry. By making only one hemisphere you get an 8 bit ALU rather than a 16 bit one.

It would also be possible to make it shorter.
Would a video be helpful?

That won’t be necessary, I just haven’t seen anyone use the term hemisphere to describe that.