Just some things you should know and look at

User(s): 75rx
When: The past 8 months
Description: As you all know, 75rx has repeatedly harassed people for random things and openly shares hate toward some members of the community. These are a few things that have been directed at me, or other people that I would like to share.
I will start with hate towards me.

Here I had simply said I don’t like pistons. (a simple opinion)
He then started just using it as a way to express his open hate towards me.

This is another from around 3 months ago.

Here is where I start hate and implied hate toward other people.

Here he is talking about how he hates mess for “getting him banned” when mess did nothing wrong and was harassed by him.

This just supports my last description. Also just straight up blaming his actions on others. 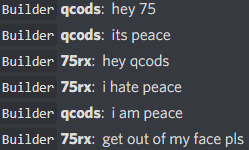 This is him just hating on one of the youngest in the community, qcods. (previously Peace)

This is him hating on a member of our community, Boopy. Also implying he has a list of hated members!? 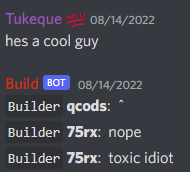 Again expressing hate for Boopy and harassing him.

Here he is commanding me not to talk with Boopy, he also CLEARLY does not understand meanings of words here.

Here he is openly expressing hate toward q2ck. 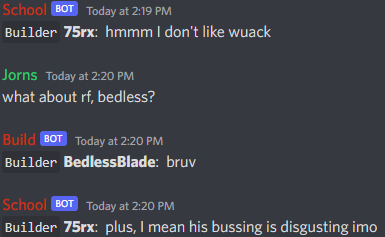 This was today, I simply said I don’t like pistons.
He took this and started talking about how that means I hate q2ck, jorns, and rzecs. (q2ck I am incredibly fond of)

Here to he is hating on random things q2ck works on.

Here he contradicts himself from the last one slightly.

Here is where he talks about how I “hate” q2ck because of me not liking pistons.

Here he yet again contradicts himself.

He also just brings up unprompted things all the time which are occasionally offencive.

Now, the current system we use for punishment is ok, but it is not working which is sad for this member. I’m very sad for them if they go out into the world like this and never learn. Nonetheless, something has to be addressed. This will never slide in real life and he could get in serious trouble for things like death threats in real life, or offencive things. When I discussed this he just played it off as he would just yell “L” in real life, clearly showing he does not take that seriously. He also just repeatedly contradicts what he says to try and get out of trouble or to get someone else in trouble, he needs to learn that these things will never slide. I feel very bad about it because these things could change his life for the worse.

This is him implying that he wants Boopy’s plot deleted.

Haven’t read the entire report yet but I was there for this and it was just general discussion related to the reset and deleting inactive plots has been suggested a few times before. As far as I can tell, not referring to Boopy.

While 75rx openly expressing his dislike of some ORE members can be less then pleasant, it’s nothing rule-breaking. I’m not sure this warrants much of anything but if you have concerns it may be best to communicate that with him directly.

While ORE staff are a resource for many issues, interpersonal issues that don’t break any rules are something you need to have the maturity to resolve between yourselves. With that said, we’d prefer you don’t use the moderation system to get an ORE authority to settle this type of personal dispute.

oh sorry, I believe i joined in the middle of that then

I agree, I did not intend for anything to be done with this. I am quite worried about when he goes out into the world and interacts with people in the future. However this is not the place to discuss that and I understand that.

I’m going to say something about this, because I feel like I need to express my opinion about this whole thing.

If all 75rx would do is express his dislike of some members, I don’t think we would be here talking about this, he wouldn’t have had his bans and so on. Problem is that it isn’t just about expressing his dislike about someone, and even when that happens, he often goes beyond just expressing his dislikes about someone, he often chooses to harass them continuously, pushing bad experience on those select members.
Not to mention that he hasn’t seemed to learn a thing from being “punished” by staff, as at this point he has been given more than three chances to right himself with none of them being successful.

In my personal opinion two chances would have been enough after the scale of offenses he’s gotten himself a ban for previously, especially having been attacked by him myself

And as much as I wish one could have a mature conversation with him, he seriously does not express one bit of maturity, you cannot properly communicate with them, and even when asked to stop, kindly at that, he just feels the need to continue. There just is a point at which there is no choice but to get the moderation system to act.

All of that is my personal opinion though, so take it as you will, I am not a moderator, nor do I plan to tell anyone how their job should be done as I think everyone is doing wonderfully, just wish 75rx wouldn’t get away with stuff like this constantly.

What I highly recommend to do is to never pay attention to me, pretend I don’t exist, and stop at least talking to me. If you keep talking to me, we’ll both get banned and punished, I suggest to finally stop, once permanently.

If you stop paying attention to me, the same I’ll do to you. For a long time, you didn’t talk to me, I didn’t talk to you, everything was great, but then you started making not-so-good jokes about me, so we both started arguing until now. Les told us to stop arguing, or also stop paying attention. You can try to not listen to me, listen to staff then!

Suggestion: DON’T talk to me, not even make jokes. Don’t join me about talking to someone (just a reminder). Be like I don’t exist, be like I am dead in real life, be like I am offline permanently. If you do so, the chaos happens. Les also told us both to not add reports to Incidents, if you need to report, just report in a game, don’t make a scene.

Follow what I said and everything will be awesome and good. You’re the one that started creating chaos.

Also, I am not harassing people for no reason, there’s always a reason. Stop lying.

Also, you posted many discontinued images. Looks like you’re trying to get me banned, huh?

Staff, open chat logs now. Go to these messages, they’re discontinued. After those I posted a little more messages to chat that don’t make these look awfully bad.