User(s): QMechanic, nnewram
When: Sep. 1 2020
Description: I found a spherical cavity in one of my display decoders, done by QMechanic. And lots more blasted out of a neighbor plot floor by nnewram. Neither player is /p trusted on either plot.
According to Aminotreal who was online when it happened, they “accidentally left their hacked client nuke mod on”. They supposedly asked staff for the damage to be fixed afterwards. I have my decoder saved as a .schem though, so I’ll be fine, but that doesn’t excuse what happened, and my in-game decoder is still broken. I don’t want to have to rely on a thousand schems just to sleep well at night. 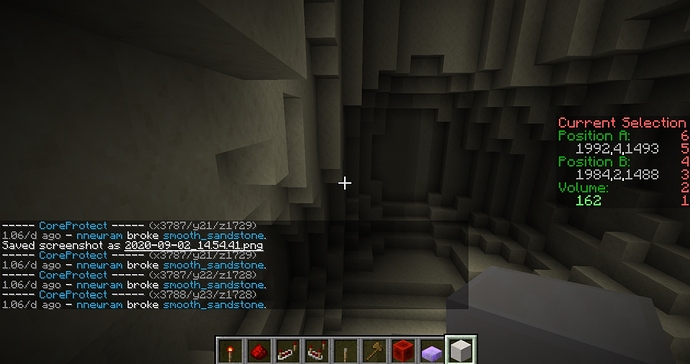 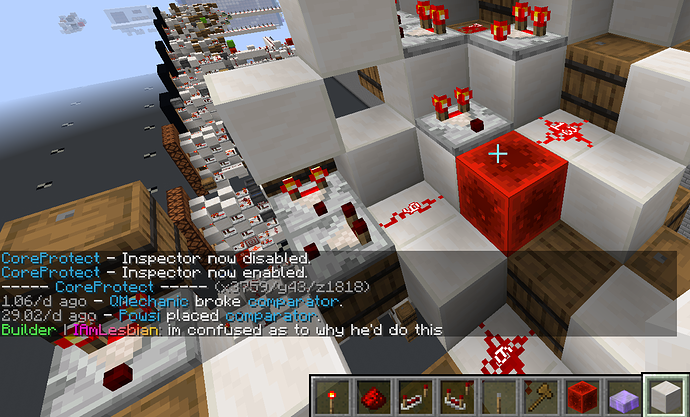 What is it that you are reporting?
The fact that this can happen, or me and qmechanic?

Qmechanic accidentaly nuked your thing, asked every admin to fix it, iirc pauk did. Problem resolved.

Further, i nuked the blank plot for fun, there was nothing there. Not a problem.

What is it that you are reporting?

It seems he is reporting the action as an incident and raising awareness to what issues may arise from using it, which is a really good incident report.

I would like to say that there may be an issue with this nuke functionality. Earlier today the utility was used to clear a build. This was fine as @Midd was clearing the build anyway. Within a minute of the build being cleared with the nuke utility, the TPS on the server went down quickly, continuing to go down until it was restarted at ~3.5TPS.

We ran some timings to figure out some information about what was going on and it was networking related, which is almost never an issue. It very well could be that this utility didn’t properly communicate with the server. In this case, we would like to relay what errors we could see so we can help fix the problems the utility has.

Lastly, I strongly warn against the usage of this utility on ORE. It very well could cause other unforeseen issues and any issues that arise because from it can lead to some form of punishment. Instead, keep it on a test server or a playground world. It is fun to program modifications like this but untested and unwarranted mods can sometimes cause unexpected and irreversible damage.

nick do be spitting bars