Minecraft name:
Peacock11
What do you like the most about redstone?:
The way it can be used as a tool to explore and teach concepts in computer science. I have learned and understood more about low level architecture from redstone than the entirety of my high school computer science course. I also get great satisfaction from the idea of stacking up layers of abstraction, all the way from the design of individual logic gates to implementing an entire operating system on a computer made of some dust inside a block game.
What’s a thing you have made which demonstrates redstone knowledge?:
An 8-bit pulsed instant ALU
What does the thing do?:
Abuse quasi-connectivity for profit
Instructions: ADD, SUB, XOR, OR, AND, XNOR, NOR, NAND, INV B, NOT, INC
Capable of running on a 3 redstone tick clock
Image(s) and/or video(s) of the device: 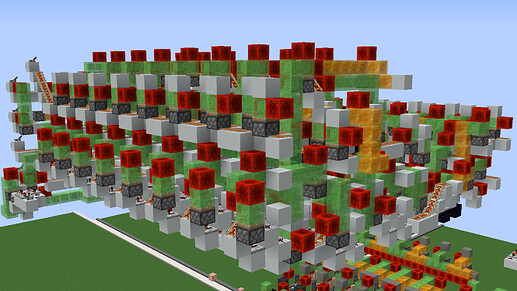 Builders and above can always just ask for more plots if they want, staff has let people get more plots for projects in the past.

Thanks for the info Les. The current situation is fine by me, as Sneaky owns the two merged plots which make up LEG and I have my own plot elsewhere. Capo just wanted me to clarify here that my original plot was being merged with Sneaky’s.