User(s): Spriggan12
When: Just now
Description: This player is very cringe, to be honest. But, the cringy thing does not matter.
This player kept building like 10 d!cks all in many places of one player’s plot. I built a giant e letter on their plot, which I forgot to remove (but I will), and yet he started building 3 more d!cks inside my giant e.

Although the player was removing them, it may seem fine. Afterall, I was just ignoring whatever he was telling me to do, chilling and jumping around my /build plot in the meantime. Right before he left for like 7 minutes, I got this message. 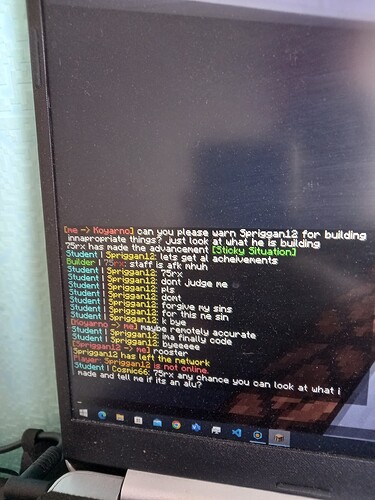 Just a note on only my behalf, there are several things that dispute your claim:

Speaking about that ‘e’, I planned to remove it later, but I forgot.

Your report is currently being reviewed and you should receive a response within the next day or so. Sorry for the delay.

Good day. Recently this player was also super rude. Since he didn’t get noticed by staff members in time, he was like chatting some real bad words, later on responding something like “cries…” while I wasn’t obviously. I know this may be considered as a joke, but this also may need to be handled. I think banning this player for being such innapropriate is a good idea.

If anything new has come up, I recommend sending relevant screenshots here to aid in our decision-making.

Following staff discussion we have decided not to take any action at this time. If anything new comes up, feel free to let us know and we’ll handle it accordingly.