What do you like the most about redstone?: The fact that you can visualize technical Computer Science stuff easily. I like that its core concepts are so simple but that so much is possible.

What’s a thing you have made which demonstrates redstone knowledge?: I have built a Turing machine in Minecraft. (For Turing machine reference: Turing machine - Wikipedia)
It uses an array of D-FlipFlops as the tape. The programs itself are stored in RAM with 8bit instruction length (write, move, terminate, 5bit next state). I also built an editor that displays the current lines of code and where the RAM can be written.

What does the thing do?: A Turing machine is a theoretical design of a very very simple computer that yet can theoretically do every computation which is also doable on a CPU. It uses a tape as storage of data and a moveable head that reads only the bit at the current position. Depending on this bit and the current state of the program it can set the bit and move either left or right. Also it goes to a next state depending on the program. 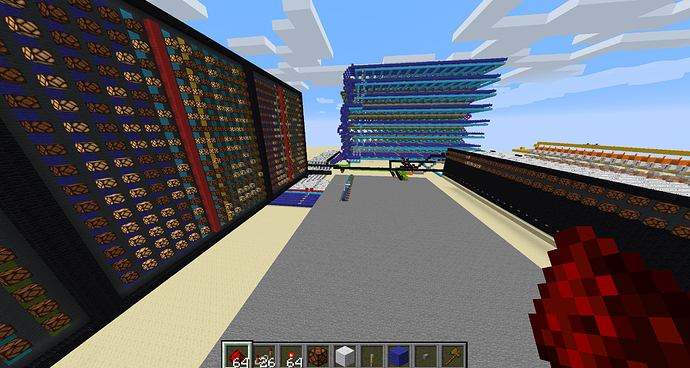 The picture shows the tape of the Turing machine on the right and the program display on the left. In the background you can also see the RAM which is used to store the programs.

What do you plan on making for your build trial?: I will built a 4 Bit ALU that can ADD, SUB, XOR, AND and OR.

Do you agree with the rules?: Completely.

Don’t confuse them by pretending you can accept applications

(This is from an official Staff member, so you’re not being lied to)

that sounds like something a non staff member would say nick