Before starting to answer everything:

What’s a thing you have made which demonstrates sufficient engineering knowledge?: I’ve invented CPUSRGP (CPU-Style Redstone Graphics Processor). This is something most of players didn’t see.
This is basically SISD, but it is optimized to only render anything. For example, normally you plug X/Y coordinates with the help of I/O, but to create even more useful instructions relative to X/Y coordinates which are easier to do, even giving less headache when programming, I’ve made a special light gray device there. I call it Coordinates Device. Normally it obviously doesn’t exist, but it was decent to easily create awesome and useful instructions in this SISD. Now, you cannot use this as passthrough, unfortunately. But most of players don’t use it anyway.

What engineering work went into designing this device?: September 2021 - the month/year of me joining on ORE for the first time. I was slowly becoming better at redstone, but then I saw KilledbytheTV say something like “yeah fibonacci sequence loads like 30% of the CPU”. I teleported to him to see what he made, and oh my gosh, I wish I could run programs myself.

I kept asking for help from players about computer and CPU components. I was learning slowly, but everything was getting better and better.

Oh no! I got banned! I gotta wait for 6 months now.
…
Okay, finally unbanned.
And then I kept learning even more components and instructions of the CPU - even faster.

Until I made ExecutableMinec- oh. Exactly, that CPU was very buggy. And instruction pipeline(!) was the reason +RAM. Fixing it could take a ton of time.
So, I asked Koyarno about “can I still get an Engineer if I make a good enough CPU-Style GPU that’s not pipelined?”.
He said something similar to yes. Got happy and built this. This CPU is far more stable because it isn’t pipelined. There might be bugs still - I was fixing bugs and modifying world downloads for my EMC2 exactly 10 times(!). This is hilarious, since it still doesn’t work. But this CPU is a lot better.

This is why you should NEVER give up. It’s been exactly a year now and I made this.

What’s even more respectful is I am actually 10 years old (11 tomorrow) and I make stuff like this. Never seen anyone else that’s 10/11 years old make this. I am probably the first one ever.

Image/s and/or video/s of the device:
I’ll upload YT Video soon.
Lol, I cannot take a picture. It says Unable to do this operation because of low memory and then just saves this as a draft. I tried multiple times.
If you still need some images, let me know.

I haven’t yet reviewed the entirety of the application, but what I have noticed fairly quickly is that I’m not able to gather much about how the build is laid out from just the single image. It might be useful to provide multiple additional images from various angles.

I’ve compiled some thoughts from those of us reviewing the application:

Are you uncertain about the specifications of your own build?

Although this SISD isn’t pipelined, immediates obviously are.

Could you elaborate on this? As far as I’m aware, immediates aren’t something which can be pipelined.

This is something you should handle prior to submitting an application with the build.

Your entire section under the question “What engineering work went into designing this device?” doesn’t answer the question itself. It is just various background information on you. What we are interested in is the process from start to finish on your particular build.

-3 operand RISC architecture with 5-bit opcode, 37 instructions with 8 NOPs, allowing you to add 8 of any instructions you like. This SISD is using MSC instructions (Miscellaneous), which is dark green part. This is to increase the amount of instructions. Obviously the ones that require MSC don’t require any operand.
-I guess 8-bit instruction length, I am assuming.

It would also be appreciated to include your ISA somewhere. The stats are neat but there’s no programs or anything to indicate the specifics of the ISA itself.

Is this satisfying now?

Generally the expectation is that all information is easily available on the application. This includes images of the build, the instruction set, and other relevant information.

You could provide a top-down view and pinpoint each component.

Ultimately, you have to provide programs that it can show and run.

I do not see the added benefit you got here by making x/y dedicated buffers and a screen that can buffer draw calls. You have some more options to save data to these buffers, but that is too little to go on.The least i would expect is some hardware acceleration.
I leave that as an open suggestion.

Here are a bunch of images I made. 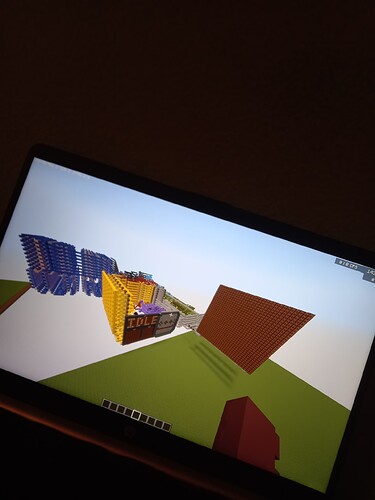 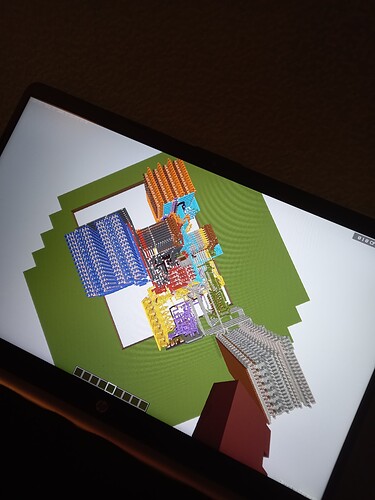 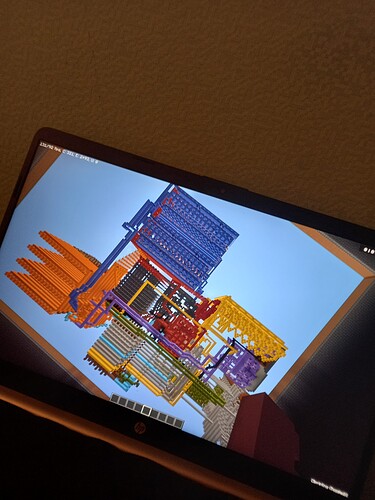 The middle of the CPU:
“Unable to do this operation because not enough memory” For more images I need to post another reply

Those images are really big, for little sharpness. Try to compress them further in the future.
Can’t you just print the screen using f2? (f2 is on your laptop)

I am using a phone bruh

I think it’s made on purpose 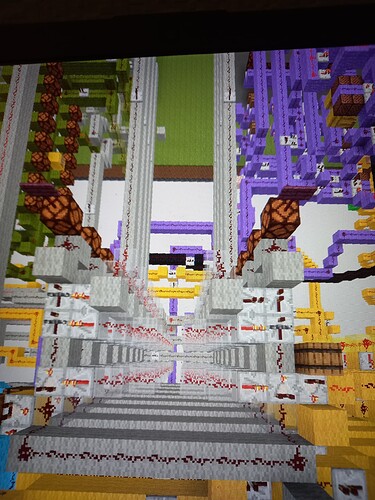 Also the CPU is running a small program, so Y is getting updated.

Note: I was searching around this entire SISD, and found 4 bugs. I recommend redownloading the map if the SISD is buggy.

Sure. I’ll try my best to code it so it outputs awesome pictures (I can do animations too)

If you could tell us about the programs it can currently run, that would be appreciated.

I did a little modifications to the CPU, and now after that many instructions don’t function as intended. Before showing what it ran, give me some time while I am fixing a little bit of instructions.

If you’re curious: everything gets better and better, I just have to replace these registers with a better design.