What do you like the most about redstone?:
It’s weird and quirky mechanics have lots of potential for abstract optimization. Finding a fast / small solution to a problem is very satisfying.
But for me it’s mostly an automation tool. Studying and work take up most of my time and I just play minecraft from time to time to relax. I used to do a lot more redstone stuff, but I lost my redstone world a couple years ago when a hard drive died.

Recently I have started a new redstone project for the first time in years which requires some computational stuff, which is why I want to join ORE.

I am not all that interested in turing complete CPU’s and instead plan on building stuff that is useful in survival minecraft. The Project I am working on right now is a recursive crafting recipe logistics processor that I plan to use in an almost vanilla logistics system, using carpetmod autocrafting.

I want to become a builder because I believe it would help when collaborating with other server members. I do not plan on creating anything novel or on improving the state of processing in redstone. I simply lack the time.

If this isn’t what you are looking for in a member then I am probably not a good fit for the builder role.

What’s a thing you have made which demonstrates redstone knowledge?:
To freshen up on computational redstone I have build a 4-bit 4 function ALU.
It’s function set is similar to the one in the first youtube result since it seemed reasonable, but it’s quite a bit smaller.
It is likely also slower, but speed wasn’t a goal when building this.
I have designed it from scratch as to understand it fully.

What does the thing do?:
Perform various functions on two 4-bit binary numbers. The four basic functions are NEGATE B, A AND B, A XOR B and A ADD B, which can be composed to widen the feature set to 12 functions.
It also has a CARRY IN input. 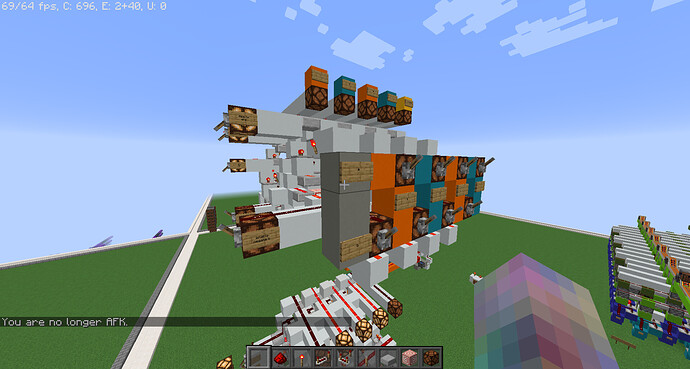 What do you plan on making for your build trial?: A 4 Function ALU.

Do you agree with the rules?: Yes