A while ago I thought about making a hex-based CPU (signal strength rather than binary).
I discarded the idea at the time in favor of ideas that seemed easier.
But now I feel like attempting the project seeing as I have more experience with hex-based logic.

Edit: Removed random stuff that I don’t care about, updated the list, etc

I still think 16 hex digits are too much to wire, but: I absolutely love the name

Yeah I’ve got my work cut out for me with the amount of wiring I have to do. But if I get the equivalent of a 64 bit CPU I think it’d be worth it for some aspects to be less than ideal.

Yeah hex does typically seem to be at least a bit slower than the binary equivalent, but at an ~4x reduction in size I’m not too bothered by that.

What if you would do double density, as in, twice eight bit wires so it’s not that tall (presuming you’re going with vertical wiring)?

2 groups of 8 lines tall rather than 1 group of 16 lines tall? I’ll test it out at some point and see how the 2 compare, thanks for the suggestion.

This is a solo project, sorry

Why does he always want to help out just to say he has done something?

Currently working out all the instructions.
“Isn’t this too much?”
I have no idea what you’re talking about and I’m planning to add more.
Also, yes, I’m missing conditional branches and probably other stuff too. 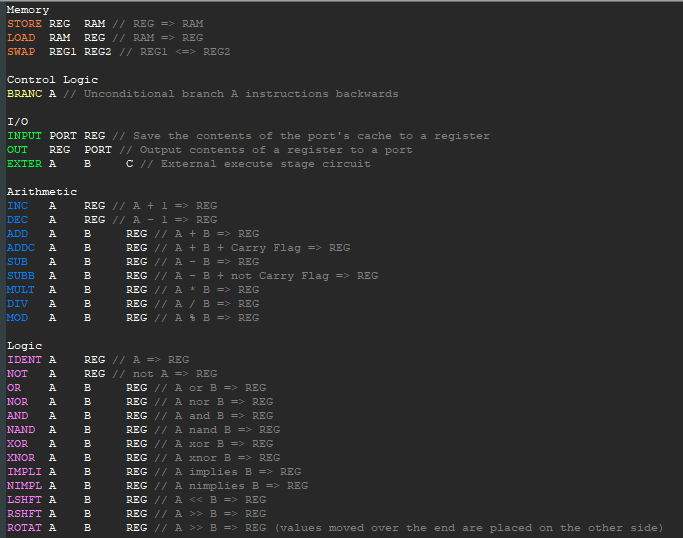 no SQRT, SIN, COS, TAN, SIMD, or floating point? shame

what about fixed point?

Probably leaving everything as integers but we’ll see

well then how would u do trig stuff lol

Likely with dark witchcraft but we’ll see what happens ig

alright I guess u can just round lmao