This time, we’re looking to bring on a few more moderators to raise the total number of staff members. We’re looking primarily to improve staff activity, but also for any skills potential candidates might bring to the team. As always, this is a democratic process, so make sure to keep yourself and others aware of the process. In the next section, the phases of ORE’s Staff Elections is covered in depth.

Over the next 2 weeks, all ORE members are free to nominate any ONE Builder/Engineer for Moderator. Provide a brief explanation (2 to 5 sentences) on why you believe they should be nominated. Self-Nominations are permitted. Nominations should be posted as replies to this announcement.

Any duplicate or joke nominations will be removed.

Staff review the nominees one by one, voting on each. If any candidates have a history of bad behavior on the server or has shown (based on prior behavior) that they would not be fit for moderator, then that nomination can be vetoed by staff with a majority vote. Note that a discord account is a requirement for being a staff member as our staff chat is very important to have direct access to.

The list of accepted candidates is released. Each candidate will respond saying they do/don’t accept their nomination. Not responding during the 2 weeks qualifies as not accepting the nomination.

Over two weeks, all Builders, Engineers, and Staff will be able to vote who they want to become Moderator. Candidates can be ranked from top to bottom or left off the ballot entirely. The voting system ORE Staff Elections use is known as STV.

During the process of Moderator Elections, Staff will also perform their own Admin Elections and vote on the Moderators to promote to Admin. This likely won’t happen right at the same time due to technical limitations, but will be around the same time.

Once voting concludes, there will be a brief pause while the results are calculated and the announcement post prepared. When the results are posted, the new moderators will be reached out to and given staff orientation.

As the election Phases progress, information will be updated in this section.

I nominate _zebek.
Skilled redstone player, often plays this server, no incidents before and kind to everyone. Nothing to say about bad things about this person.

I am choosing to nominate Q2CK.
He is an amazing redstone engineer, and from what I’ve seen in the past year he has been a kind, welcoming and trustworthy community member. He is also a regularly active player and is willing to help others.

I want to nominate Kuggo as he seems to be active and a very good role model with his kind behaviour and teaching.

I am nominating KilledbytheTV. He is always active. He is one of the best people on the server when it comes to computational redstone. I believe he will make a fair and great edition to the staff team.

Duplicates nominations will be removed, please stop posting them. Also please refer all discussion elsewhere, this is meant purely for nominations.

i nominate jenra_uwu becuase she is smOREt. She also is an active community member and is very kind

I nominate Rtyyyyb
its a good friend, respectful and very kind, i know him since 2 months and his a good person. his not the best at redstone but his imagination for design component are very good. and also his always avaible. sorry for my english, Baguette

I very much support Killed. However, I think another person could be added.
BedlessBlade is extremely active in the community and is very helping, so I feel like he fits.
I don’t agree with rtyyyyb, considering he tried to grief me earlier, and he would definitely not be fit for any kind of moderation.

I nominate oscar91 because they are knowledgeable about redstone, and have decent jokes

i nominate berndl for the following reason:

i nominate ShayHi
because i think they are very knowledgable about minecraft and would make a great mod.

I nominate myself, although I think everyone in this reply seems amazing for moderator.

I hope you will vote me for being a moderator.

I nominate YuniStellar, InternetOverdose, Yustina! and Seminar_Archive. They are very cool and can do 4 times as much work as any other regular human.

I nominate Terrain2 because: 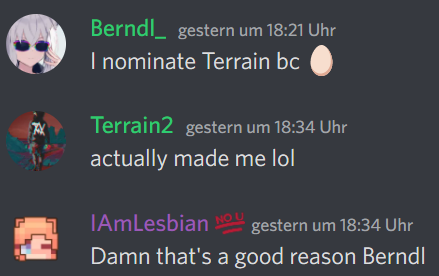