Yes, you read that right people, we are doing elections! The best part is, the process is starting now!!!

[While you’re here; do not forget there is another build competition tomorrow!]
We have noticed that there are times in the day where we could have a bit more staff coverage on the server… so have you; yes we hear your cries for more mods. In addition to this lack of coverage, the ORE staff team wants to get started introducing new things to the server to make the day to day activates on ORE a bit more engaging. These new things will be a mix of old ideas that we want to revisit, some new things we are still discussing, and things you all [the community] come up with in the future. In order to patch the holes in our moderation coverage and get help with those new shiney things, we are gonna get some new mods! Aannnndddddd… sooooo without further ado; the following process will take place starting, well… well now!

Phase Numero Uno: Nominations [RIGHT NOW!] - Ends April 10th at 11:59pm PST
*> You all nominate someone, this time you may nominate yourself. This nomination should include a brief explanation [2-5 sentences] of why you or they would be great moderators.
*> NOTE: Students can not be nominated, and all builders/engineers who are nominated must be builders for at least the last 6 months.
*> NOTE 2: Only one nomination is allowed per person. If you nominate two, the first person on your list gets the nomination.

Phase Numero Dos: Audits
*> The staff freezes the nominations and begins reviewing them. If the person nominated has a history of bad behavior on the server or has shown [based on their prior behavior] that they would not be fit for moderator… then that nomination can be vetoed by staff with a majority vote.

Phase Numero Cuantro: Voting
*> Details: TBA
*> NOTE: Students will not be allowed to vote in the election. So hurry and get it if you would like to vote.

Phase Number Seis: The Great Reveal
*> We reveal the results of the election and we welcome the new moderators

With the nominations phase starting now, post your nominations below using the following template. You have until 4/10/2021 to nominate.

TL;DR, we are doing elections, the details on what to do RIGHT NOW are directly above this TL;DR. Enjoy!

Details on the next stages will be released as they start.

Currently Nominated: [3 of these nominees will be awarded moderator]

ALL SHIT POSTS WILL BE DELETED as will all duplicate nominations

So, for me Kuggo would be great choice for a moderator because of his kindness and commitment to ORE and redstone, he would make a great engineer too because of his many builds that display such skill. He even makes time to teach students and help builders with their work. What impressed me alot is the patience he has while listening to others and the fact that he shares his knowledge freely. So, according to his qualities and knowledge, from my point of view Kuggo would be one of the best fits for being staff.

Nominee: IAmLesbian
Reason for nomination: Well mostly of how the community has been built around Les. I’m not saying that Les was a key fundamental, just how they were an important aspect to it. They were pretty much always up for helping people, teaching anyone, and welcoming newer people. Les also helped put together the past few competitions which were very nice indeed.

They are also both just really nice people.

Nominee: Don_Manuel_1229
Reason for Nomination: Don has been around on ORE for a good while and for the last few months or so he’s been pretty active. He excels with computational redstone to a significant extent and he has made designs that have bettered ORE’s redstone. During various conversations with him, I’ve gotten the impression that his thoughts on moderation could prove beneficial to ORE. I can’t speak on what exactly he’d do as a moderator, but I’m sure he’d do well in the position.

Nominee: Powsi
Reason for nomination: This is a member who continually demonstrates maturity and serious commitment to what he is involved in. He is clearly dedicated to the openredstone community and would do fantastic as staff. Powsi’s ingenuity and technical skill show that he would handle the moderation responsibilities accurately. They are very kind and willing to help whenever anyone asks them about what he’s working on; he wants to help others understand redstone and progress their learning.

Hey everyone, try not to waste your nominations by nominating someone who has already been nominated!

Nominee: _zebek
He likes pineapple on pizza.
He 20 yo.
He are redstone nerd.

I would like to nominate myself because someone already nominated les and don. I’m online a lot, but I don’t have any ongoing projects and I’m open to helping people. I’ve taught a lot of students as well and I would like to help other people too. I have enough knowledge to help people but not enough for engineer. I know I’ve been banned three times, but two of those were for accidents and one was 5am chat spam.

Nominee: Choco
Reason: They are super chill with the community and it is easy to ask them questions and get answers. They are mature and really good at redstone. They’ve also been on here around 9 or 10 months so they’ve seen how this server works and for real they just got those chill vibes. They also work well with others, I’ve seen them works with others in competitions and teach students and help out other builders with projects and they do a great job with teamwork. They also do well wit keeping chat chilled out and are not afraid to tell others to back off or calm down. Choco is quite active, and I believe can be relied on to help others and is responsible enough to handle being a staff member.

Amino has proven to be an extremely helpful member in ORE; be it teaching, or aiding people with their builds, or de-escalating situations in chat. He is an active member with no disciplinary record in an under-represented timezone (Australia time). I think Amino would make an excellent choice for staff; if he so wishes to accept the responsibility.

Nominee: __Meme__
Reason for nomination: Meme stands up for what he believes is right, and is willing to hear all sides of an argument. He will never be outright rude to others or intentionally try to harm them. He hasn’t been a part of this server for long, but he has been on the server regularly and knows most of the regulars. He has levels of dedication that are… mentally questionable. He’s have rarely caused problems, and when he has, he always at least attempted to help fix them. He isn’t the most intelligent one here, not by a long shot, but he has strong moral standings and will do his best to ensure all players get the information and aid they require.

Nominee: myself
Reason for nomination:

Reasons for nomination: Capo seems like a pretty knowledgeable guy, he’s nice and friendly, helps out a lot with trials and other moderation stuff, and seems like he’d be a perfect fit for getting moderator. He’s super knowledgeable in computational redstone, and he already seems to be close friends with the staff.

I nominate DMVerfurth
DMVerfurth is a cool guy who can work on cool things. DMVerfurth has experience with crashing the server so he is clearly the ideal candidate. Most importantly, if you don’t make DMV mod, he will take your drivers license

Nominee: IAmLes
Reason: As much as their strictness annoys me, they are the most appropriate promotion and I feel with said nominees active-ness in the community and with members of the server it is almost guaranteed they will at least get a role from this election.
Good luck Les

Nominee: Ecconia
Pronouns: Him, her, it, they, she, he, hers, his, them, theirs, him, ve, ver, vis, per, pers
Preferred Pronouns: He, his, him
Zodiac Sign: Cancer
Reasons:
one) He speaks gOREman and engORElish, can’t speak danish, polish, norwegian, dutch, french, croatian, greek
two) He is a good leadORE figOREe
three) 5+ yOREs of administrative experiOREence
fORE) He will restORE OREdORE
five) Can code JavaORE
sOREx) Dealt with many undesirable people in an orderly fashion
seven) Hates bullies, can’t see colOREs
eight) WhenevORE I helped him, he always said tanks
nine) Great with kids 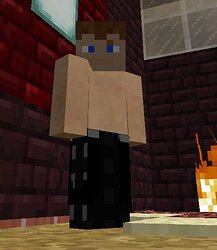